Are Data Centers Immune to COVID-19?

Publicly traded data center REITS reported solid first quarter results, outperforming every other REIT sector during the period. The first quarter results reflect just under a month of the pandemic and after listening to the various quarterly earnings calls and numerous discussions with friends and colleagues around the globe in many facets and types of real estate, it further reinforced my confidence in the asset class.

The question now becomes: Will we see more capital flow into investing into the data center equities and/or other data center investments?

Underlying concerns about tenants not paying rent and owners not paying their mortgages coupled by the shutdown of CMBS markets will resonate across most of the REITs. Data centers, office towers and Industrial will be less impacted with certain industry sectors reporting higher delinquency numbers, some will be artificially propped up by the government bailouts efforts during April and May.

The worst is yet to come for the REITS and just how bad things can be will be accentuated during the second quarter as individuals and states are quarantined for longer periods of time, which will further hinder leasing. All of the sectors will be impacted to various degrees during the short-term but some will be forever impacted.

The performance of publicly traded REITs over the past two months is best depicted in this graph from Green Street Advisors: 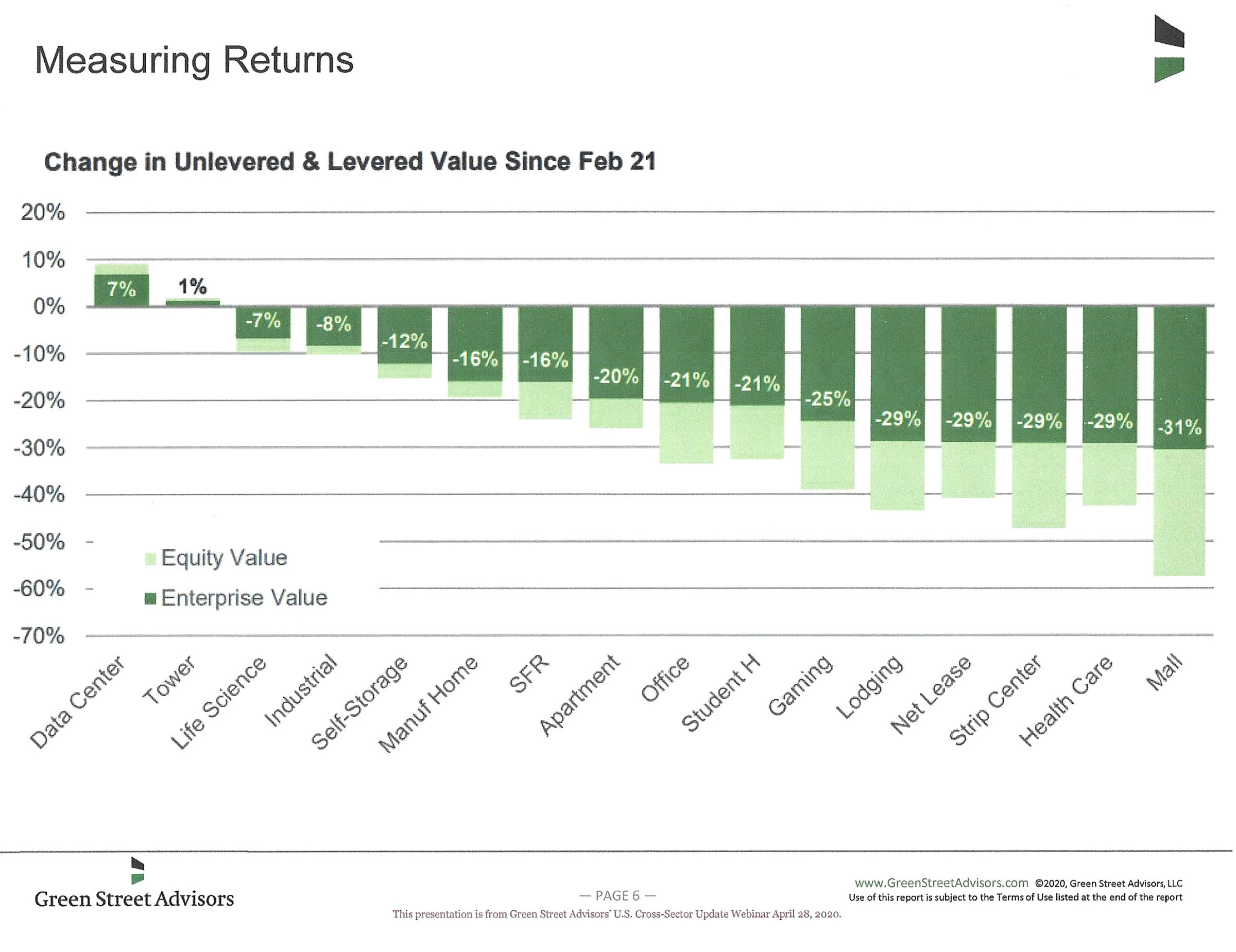 Although the Industrial and Self-Storage sector seemed to have had little downside, some of the conversations I have had with different groups raised concerns about construction delays related to government approvals for permits and inspections. Others have said that there have been issues related to virus-infected workers getting coworkers sick, which is impacting trades. Smaller industrial properties with local manufacturing will be impacted. Overall, these sectors could see an adjustment in pricing but should be slight at under 10%.

The Residential real estate market will suffer in the short term from the widespread stay at home orders and social distancing guidelines, which halted in person showings and open houses at the start of the spring home buying season. The speed and the extent of the job losses could have a longer term impact as people are unable to pay their mortgages. Many also are expecting a flight from large metropolitan areas to suburbs and secondary markets, which offer more space and affordability. Multifamily will be less adversely affected, although I have heard that younger residents in large metros will contemplate moving s back in with parents or to smaller cities.

The Office market also will face challenges. As companies return to work over the coming months, they will need to rethink their floor plans and work schedules to accommodate social distancing. In addition, with many companies working from home effectively, many wonder whether they will shift to a virtual workspace as a way to reduce brick and mortar costs. Expect U.S. office vacancy rates to spike to 20% while sublease space will flood the market.

Although Retail woes are not new, the consensus among the strip centers I’ve spoken to is that they will not be able to recover. Service providers such as dry cleaners, smartphone stores, medical and dental, and hair and nail salons, day spas and barbers will thrive, but many other tenants will go bust. Malls are also facing challenges and as many retailers including Neiman Marcus, J. Crew, Brooks Brothers, Sears, and JC Penney are contemplating or filing for bankruptcy or shuttering locations. s. Restaurants have been hard hit during the pandemic. Across the nation, more than 20% of restaurants will close permanently, and the number will be higher in certain markets, like Illinois, where restaurants are not reopening until the end of June.

Homeaway, Airbnb, and now the COVID pandemic has caused havoc on the Hospitality industry. Given the recent success of videoconferencing, business travelers will not necessarily be there to prop up the industry like they did after 9/11. Many of the smaller hotels and chains will perish. The larger operators will reinvent their loyalty problems, but this is a sector that will take a long time to recover.

Student Housing will suffer short-term from some students electing to choose eLearning rather than return to campus or take a gap year. The longer term risk to the sector is the viability of the institutions as smaller schools close.

Health Care sector has been weighed down by the impact of the large number of coronavirus-related deaths in senior housing facilities across the nation. Watching my parents transition in the last year to a senior living facility has helped me realize that while the real estate side of the equation makes sense, the staffing is not adequate to proactively respond to crisis and implement necessary safety precautions, The pandemic illustrated just how ill- prepared the sector was. The medical office side has performed reasonably well, but short-term the sector will be impacted by hospitals’ lost revenue due to the halt of elective procedures during the pandemic.

Leasing
In contrast to the other real estate sectors, e the data center sector reported less than 5% of tenants seeking rent relief and leasing and investment activity remained strong during the first quarter. Most municipalities are viewing construction as essential businesses and Ireland, Singapore, Toronto, and Hillsboro, OR were noted delays but as this virus is fluid, this may change with a second wave of the pandemic as it did in Singapore. This is important because delivering inventory in a timely fashion is critical for a REIT.

Leasing activity has also been strong with several of the private REITs as well. Aligned Data Centers leased 12MW with Bytedance, and Vantage had a strong first quarter signing a couple of large leases.

Investment Activity
Despite the overall challenge with the Commercial Mortgage Backed Securities (CMBS) markets, there continues to be strong investment activity highlighted by a recent sale in Phoenix. Landmark Dividend purchased a 184,000 sf data center property at which Paypal signed an eight-year sale leaseback. The cap rate was in the mid 6 range.

In addition, I’m working on several investment transactions and cap rates have remained at the same levels and foreign capital has indicated their continued interest in investing!

Overall capital markets are still in the midst of underwriting assumptions related to pricing. That being said with so much dry powder on the sidelines, I believe that the data center space will be an overwhelming recipient of this capital.